Cyrus became an overnight sensation after Hannah Montana debuted in March 2006. Following the success of the show, in October 2006, a soundtrack CD was released in which she sang eight songs from the show. In December 2007, she was ranked #17 in the list of Forbes Top twenty earners under the age of 25 with an annual earning of US$3.5 million. As of December 2007, she is working on a movie spin-off of Hannah Montana, titled Hannah Montana: The Movie which is due to be released on May 1, 2009.

Cyrus’ solo music career began with the release of her debut album, Meet Miley Cyrus on June 23, 2007. Her sophomore album, entitled Breakout was released on July 18, 2008, which is Miley’s first album that does not involve the Hannah Montana franchise. Both albums debuted and peaked at #1 on the Billboard 200.

Cyrus was born in Nashville, Tennessee, the daughter of Leticia “Tish” (née Finley) and country singer Billy Ray Cyrus, and the granddaughter of the late Ron Cyrus. She has two older half-brothers; Christopher Cody and Trace, the latter being the vocalist and guitarist of an electronic rock band, Metro Station in California. She also has an older half-sister, Brandi, a younger brother, Braison, and a younger sister, Noah, who is also an actress. She was named Destiny Hope because her parents believed that she would accomplish great things. Cyrus gained her nickname “Miley” because she kept smiling (”Smiley”) as a youngster.

Cyrus attended Heritage Middle School, and now goes to school at a place called Options For Youth. She also has a private tutor on the set of her T.V. show. She grew up on her parents’ farm outside of Nashville, Tennessee.

Cyrus became interested in acting at age nine when the family briefly lived in Toronto, Ontario, Canada. Her first acting role was as a guest star on her father’s television series Doc, in which she played a girl named Kylie. In 2003, she played “Young Ruthie” in Tim Burton’s Big Fish and was credited as Destiny Cyrus. She was also featured in Rhonda Vincent’s music video for “If Heartaches Have Wings”, and appeared on Colgate Country Showdown with her father, who was hosting the program.

Cyrus was twelve years old when she originally auditioned for Disney for the lead role of Miley Stewart/Hannah Montana, as well as the show’s “best friend” roles, but Disney Channel executives judged her to be too small. Cyrus was persistent in her desire to be part of Hannah Montana, however, so Disney called her back for further auditions. According to Disney Channel Executive Vice President Gary Marsh, Cyrus was chosen for the show because of her energetic and lively performance and was seen as a person who “loves every minute of life”, with the “everyday relatability of Hilary Duff and the stage presence of Shania Twain”. She spent several years to get rid of her Southern accent, but in the end Disney wanted her to revive it. Later in an unusual twist, Cyrus had to audition her own father, Billy Ray Cyrus, to see if he would fit the role as Hannah’s dad. Cyrus currently stars in Hannah Montana as the lead character Miley Stewart, whose alter ego is the pop music sensation Hannah Montana. Cyrus also performs in character as Hannah Montana for albums and concerts.

Cyrus is good friends with fellow Hannah Montana co-stars Emily Osment and Mitchel Musso, often texting and conference calling each other during busy days. Miley Cyrus also taught Emily Osment how to play the guitar and Osment taught Cyrus how to knit. She is also friends with the stars of the highly successful TV movie High School Musical, including Vanessa Hudgens and Zac Efron, and The Suite Life of Zack and Cody stars including Brenda Song and Ashley Tisdale. 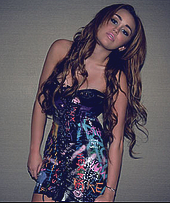